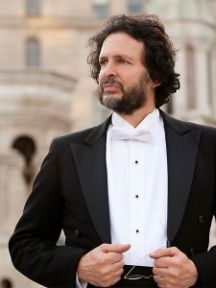 Gregory Singer’s father, Jacques Singer, was a celebrated conductor who began his career as a member of the Philadelphia orchestra under the direction of Leopold Stokowski. He was also an accomplished violinist who studied with the illustrious Leopold Auer, whose class once included Jascha Heifetz, Misha Elman, and Nathan Milstein. Jacques Singer enjoyed a successful career as a leading conductor of his day.

As the son of a renowned conductor, Gregory Singer grew up surrounded by wonderful music and legendary artists, inspiring a passion to continue the rich tradition in which he was raised. Singer is now a uniquely gifted violinist and conductor who combines distinguished artistry with an enjoyment for dramatic interpretations of the great classics. Following studies as a violinist at the Juilliard School, he began to receive frequent conducting engagements, and in 2005 founded the Manhattan Symphonie.

As the music director of the orchestra, he has performed numerous concerts at prestigious American venues, including sold-out concerts at Lincoln Center and Carnegie Hall. Under his baton, the Manhattan Symphonie was chosen as special cultural ambassadors in 2009 to celebrate the thirty-year anniversary of Sino-American relations. There have been five return engagements to China since their initial tour, including performances at the most prominent halls in Beijing and Shanghai last year.

Maestro Singer has been acclaimed as an eclectic composer of many musical styles, including Classical, Jazz, and Bluegrass. This past year marked his Italian debut as a guest conductor at the Ancona Festival, near Rome. Last February he was a guest conductor in St. Petersburg, Russia, where he premiered his composition “Memorial Processional” dedicated to the fallen of Leningrad during the Second World War. Singer’s philosophy is summed up simply: “Music unites all people of the world...”

In addition to being the owner of his violin shop and violinist and music director of the Manhattan Symphonie, Singer enjoys communicating through visual art. His unique approach and heart-warming drawings are admired by many people around the world.