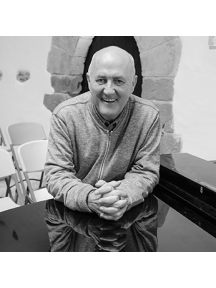 Javier Busto, born in Hondarribia, Spain in 1949, is a graduate of the University of Valladolid where he received a degree in medicine. He worked as a family physician from 1977 until 2013, the year of his retirement. As a bi-vocational journey, Dr. Busto's musical accomplishments are both vast and varied.  Throughout his medical career, Busto conducted and founded several choirs in the the Basque Country, including the of the Ederki Choir (conductor), Valladolid (1971-1976); was Founder-Conductor of the Eskifaia Choir, Hondarribia (1978-1994); Founder-Conductor of Kanta Cantemus Korua, Gipuzkoa (1995- 2007); and Founder-Conductor of Aqua Lauda Korua, Gipuzkoa (2014).

Busto is a well sought after conductor and clinician, and he remains in constant demand throughout the world.  He has guest conducted in Argentina, Canada, Costa Rica, France, Germany, Italy, Japan, Korea, México, Norway, Singapore, Spain, Sweden, Taiwan, the United States, and Venezuela.  He has served as a jury member in the 29th European Gran Prix Choral Competition in Tolosa (2017) and the 2018 Busan Choral Festival & Competition. Dr. Busto has conducted and lectured at the 4th World Symposium on Choral Music in Sydney, Australia in 1996, and he was awarded the prestigious Golden Badge Award  in his hometown, Hondarribia (1999),  as well as the Orfeón Donostiarra & University of the Basque Country Award (2012).

The music of Javier Busto is published in the Basque Country, France, Germany, Japan, the United States, the United Kingdom, and in Sweden.