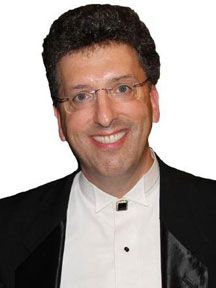 The career of pianist Jeffrey Biegel has been marked by bold, creative achievements and highlighted by a series of firsts.

He performed the first live internet recitals in New York and Amsterdam in 1997 and 1998, enabling him to be seen and heard by a global audience. He assembled the largest consortium of over 25 orchestras in 1999 to celebrate the millennium with a new concerto composed for him by Ellen Taaffe Zwilich. The piece entitled Millennium Fantasy for Piano and Orchestra, was premiered with the Cincinnati Symphony Orchestra. In 1997, he performed the World Premiere of the restored, original 1924 manuscript of George Gershwin’s Rhapsody in Blue with the Boston Pops. Charles Strouse composed a new work titled “Concerto America” for Mr. Biegel, celebrating America and honoring the heroes and events of 9-11. Mr. Biegel premiered the piece with the Boston Pops in 2002. He transcribed the first edition of Balakirev’s Islamey Fantasy for piano and orchestra, which he premiered with the American Symphony Orchestra in 2001, and edited and recorded the first complete set of all “25 Preludes” by Cesar Cui. Currently, he is assembling the first global consortium for the new Concerto No. 3 for Piano and Orchestra being composed for him by Lowell Liebermann for 2005-06-07.

Mr. Biegel has established himself as one of the most versatile artists on the stage today. He has consistently amazed audiences and critics throughout the world with his electrifying technique, elegant pianism, warmth and artistic maturity. Critics compare him to legendary pianists Cliburn, Lhevinne, Fleisher and Horowitz. With his acclaimed interpretations of standard repertoire, to his affinity for “Rare Gems of the Golden Age” and unique piano concerti (Charles Strouse, Ellen Taaffe Zwilich, Duke Ellington, Keith Emerson, Leroy Anderson) he is placed among the front ranks of today’s pianists.

American composer Lowell Liebermann will compose his Concerto No. 3 for Piano and Orchestra for Mr. Biegel exclusively, slated for a World Premiere with the Seattle Symphony Orchestra in the fall of 2005, conducted by Gerard Schwarz. It will be part of an international commissioning project currently unfolding. In addition, American composer Richard Danielpour will compose a new work for Mr. Biegel, tentatively titled “Concerto for Piano & Percussion” (5 players and piano). This new composition is slated for premieres in the 2006-07 season with the esteemed Canadian percussion ensemble, Nexus.

Among his recent guest appearances with orchestra, Mr. Biegel performed with the Orquesta Sinfonica Estado de Mexico in Toluca, Mexico as well as Leroy Anderson’s Concerto in C with the Boston Pops conducted by Keith Lockhart in Boston’s Symphony Hall. In addition, he substituted for the late pianist John Browning to perform the World Premiere of Marjorie Rusche’s Dreaming the Rag Waltz Blues and Beethoven’s Concerto No. 1 in C Major with the South Bend Symphony Orchestra conducted by Tsung Yeh. During a recent tour of Germany in May, he performed the World Premiere of Vivaldi’s Four Seasons for Piano and String Orchestra as well as concerts with the Schleswig Holstein Symphony Orchestra with Maestro Gerard Oskamp.

In addition to his concert activities, Mr. Biegel and his son, Craig, recently co-composed The World In Our Hands which has been published by the Hal Leonard Corporation as a choral piece reflecting the events of 9-11 with a vision for hope and peace. The song will be performed in Africa, Ireland, and throughout the U.S. (Mr. Biegel will be available for educational outreach programs with schools planning to perform the new piece as he tours the country). The Hal Leonard Corporation also plans to publish Christmas In A Minute, an SATB choral version of Chopin’s Minute Waltz in 2004. Mr. Biegel received a commission to compose a new work for SSA choir with the chosen text, “Hey Ho, The Wind and the Rain” from William Shakespeare’s “Twelfth Night” It will receive its World Premiere in April 2004, in New York. This will also be published by the Hal Leonard Corporation in addition to his latest composition, The Twelve Days of Christmas for SATB a cappella choir.

Currently, Mr. Biegel is performing Millennium Fantasy for Piano and Orchestra composed for him by Pulitzer Prize winner Ellen Taaffe Zwilich. The World Premiere took place on September 22/23, 2000 with the Cincinnati Symphony Orchestra conducted by Jesus Lopez-Cobos and continues to be performed by Mr. Biegel with 27 consortium member orchestras throughout the United States during the 2000-05 seasons.

PianoDisc (player piano recording company) has released “Rare Gems of the Golden Age” and will release “the Best of David Foster” and “the Best of Leroy Anderson” in the 2004-05 season. Also for PianoDisc, Mr. Biegel is scheduled to record his solo transcriptions of the complete songbook from singing sensation Josh Groban’s debut CD titled, Josh Groban. In addition, Mr. Biegel recently recorded his solo transcription of the complete Four Seasons by Vivaldi with Grieg’s Suite in the Antique Style (Holberg) for Yamaha Corporation’s latest downloadable PianoSoft software for disklavier use, currently available.

In 1997, he performed the American Premiere of the restored 1924 manuscript of Gershwin’s Rhapsody in Blue with the Boston Pops (covered by CNN, ABC-TV, NPR, CBC Canada, Associated Press and USA Today). He has subsequently performed the 1924 manuscript with orchestras across the United States including the St. Louis Symphony and a guest appearance with the Israel Chamber Orchestra under Philippe Entremont at the Kravis Center (West Palm Beach, Fla.). He has also presented the German Premiere of the work with the Bochumer Symphoniker led by Steven Sloane and the Scandinavian Premiere with the Bergen Philharmonic led by Michael Stern in Norway, April 2001.

Jeffrey Biegel was the unanimous recipient of the prestigious First Grand Prize in the 1989 Marguerite Long International Piano Competition and the First Prize in the 1985 William Kapell/University of Maryland International Piano Competition. He studied at the famed Juilliard School from 1979-85 with the legendary artist/teacher Adele Marcus, herself a pupil of Josef Lhevinne and Artur Schnabel. Mr. Biegel’s studies with Adele Marcus provided a deep passion for the great tradition of pianism, which his audiences immediately sense from his inspired interpretations and musical integrity. He made his New York orchestral debut in 1983 performing Prokofiev’s “Concerto no. 2 in g minor” with the Juilliard Philharmonia, in Lincoln Center’s Alice Tully Hall.

An avid choral music composer, his setting of The Elegy of Anne Boleyn is published by Earthsongs, and The World In Our Hands is published by the Hal Leonard Corporation. His transcription of Balakirev’s Islamey for piano and orchestra is available for rental through Theodore Presser, Antoine Reicha’s Symphonie Concertante for Two Celli and Orchestra, scored and edited by Mr. Biegel, is available through Brazinmusikanta Publications as well as Cesar Cui’s Twenty-Five Preludes for piano solo. Mr. Biegel’s pop ballads, Thanks To Our Love, lyrics by Jud Newborn, His Touch, and In My Eyes are available for vocalist and orchestra, and The World in Our Hands for choir and orchestra will be available this season. Jeffrey Biegel’s article, “Soviet Saga” based on a tour of the former Soviet Union with the Seattle Chamber Music Society, was featured in the July/August 1988 issue of Clavier, as well as a memorial tribute to Adele Marcus, which appeared in the December 1995 issue of Piano and Keyboard.

In keeping with technology, Mr. Biegel has created over 400 downloadable ringtones for www.mobiletones.com based in the United Kingdom. The ringtones range from the Baroque Period through the 21st Century. He also created over 60 holiday ringtones for the company available during the holiday season.