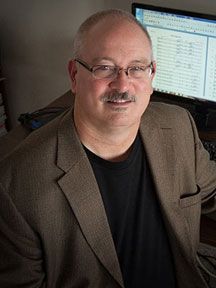 Peter Terry (b. 1957) is an award winning composer, teacher and performer. He holds degrees from the University of Michigan, Bowling Green State University, and the University of Texas at Austin. His music has been performed at concerts, clinics and conferences throughout the world. As a composer he has been sought out for commissions by numerous chamber groups, concert bands and orchestras, and is comfortable with every level of ensemble from beginner to middle school, high school and advanced ensembles. His music is colorful, dramatic and shows the influences of American popular music, world music and American classical composers such as Leonard Bernstein, Aaron Copland and Samuel Barber. He is particularly proud of the emphasis on playability and melodic interest found in all of the instruments in his music.

Peter has taught music at the middle school, high school and university level. He has been on the theory/composition faculty of the Interlochen Arts Camp since 1991, and presently teaches at Bluffton University in Ohio where he resides with his wife Lucia and three needy cats. More information about Peter and his music can be found on his website: www.peterterrycomposer.com