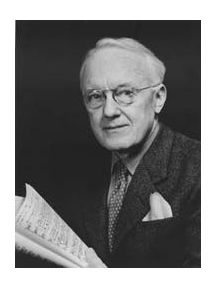 Randall Thompson was born in New York City on April 21, 1899 and died in Boston, Massachusetts on July 9, 1984. Educated at Harvard University (B.A., 1920; M.A., 1922), where his teachers included Walter Spalding, E.B. Hill and A.T. Davison, he also studied privately with Ernest Bloch. After a three-year fellowship at the American Academy in Rome (1922-25), Thompson began a distinguished career as a teacher of composition in academia. He taught at Wellesley College (1927-29; 1936-37), the University of California, Berkeley (1937-39) and was director of the Curtis Institute of Music, Philadelphia, Pennsylvania from 1939 to 1941. After teaching stints at the University of Virginia (1941-46) and Princeton University (1946-48), he joined the music faculty of Harvard University in 1948, remaining there until his retirement from teaching in 1965. Throughout his teaching career he continued to compose and became particularly well known for his many excellent choral works and for the three symphonies, which Carl Fischer represents. His music is characterized by patrician elegance, great craftsmanship, charm, and considerable rhythmic verve. The symphonies date respectively from 1929 (No. 1), 1932 (No. 2), and 1949 (No. 3).