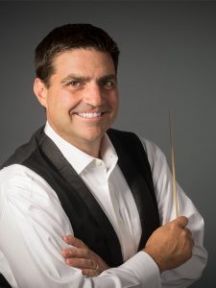 Growing up in Syracuse, NY, Sean displayed a passion for music at an early age. Sean benefited from loving parents who supported his musical aspirations and challenged him to explore music as a career. During his undergraduate years at Syracuse University, Sean's musical career began to take shape with the guidance of Larry Clark. As Vice-President at Carl Fischer Music, Larry continues to be a major influence in Sean's professional career as mentor and friend.

Through his growing number of commissioned and published works, Sean is excited to continue contributing to the rich history of orchestral and wind band literature. He is a frequent guest conductor with professional orchestras and honor bands around the country. An annual ASCAP Special Awards winner, Sean was a composition fellow at the Henry Mancini Institute in Los Angeles, and holds composition degrees from New England Conservatory and Syracuse University. For more information, please visit www.seanoloughlin.com.