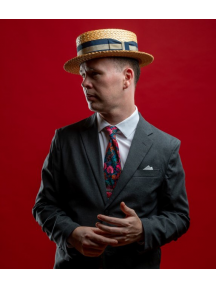 A native of West Texas, Seth Bedford began his musical studies by playing cello in his school orchestra.  He eventually picked up viola before attending the University of Texas at Austin from where he earned his BM in music composition while studying with Kevin Puts.  While there, he also studied piano, harp, cello and voice.  Since his days at UT Austin, His music has been performed by orchestras, chamber musicians, theater productions and cabaret artists in North and South America and Europe.

He's a former member of the viola section of and composer for the Chelsea Symphony (NYC) and former board member and violist for the Queer Urban Orchestra (NYC).  He is also a former artistic director of the Blazing River Freedom Band (Cleveland) and serves currently as Head Director of the Odessa High School Orchestra (Odessa, TX).

In addition to his work as a composer, conductor and music educator, Seth is also active as a visual artist and fiction writer.  He’s a long-time member of ASCAP and vintage hat enthusiast.