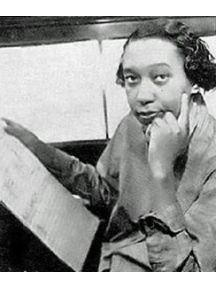 What is extraordinary about Julia Perry’s musical career was the astonishing success she attained in her early years. In her youth she studied piano, voice, violin and cello. She began to compose in her teenage years, her first publication being a choral work in 1947 by Carl Fischer. Her Stabat Mater was published in 1951 and would become one of her most often performed pieces, with performances in Europe and the United States. In 1953 she was awarded a Guggenheim fellowship to study with the Italian composer Luigi Dallapiccola, first at the Berkshire Music Center in Tanglewood, later in Florence, Italy. During this time, she also pursued studies with Nadia Boulanger in Paris and was awarded a second Guggenheim fellowship. She studied conducting at this time, touring Europe in 1957 to conduct her own works with the Vienna Philharmonic and the BBC Orchestra. During her European sojourns, she learned and mastered French, German and Italian. She would become one of the first African-American female composers to have an orchestral work performed by the New York Philharmonic.

Perry’s circumstances would change dramatically once she reached forty years of age, having returned permanently to the United States. At some point in the spring of 1970, she suffered the first of two strokes that would paralyze her right side and confine her to a wheelchair for the rest of her life. Nonetheless, she continued to compose and to promote her works with publishers and conductors. A second stroke contributed to her death in 1979 at age 55. She likely endured harsh ethnic and gender discrimination in the course of her career, and her later years would witness a period of extreme civil unrest. These matters and the significance of music in her life are undoubtedly what led her to say, “Music has a great role to play in establishing the brotherhood of man.”