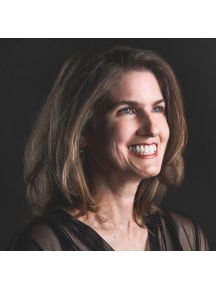 All of her works evidence a craftsmanship of the highest order.
--Fanfare Magazine
Hailed by Lukas Foss as “a master composer,” LAUREN BERNOFSKY has written over a hundred works, including solo, chamber, and choral music, as well as larger-scale works for orchestra, film, musical, opera, and ballet. With performances spanning the world, her music has been described as "a fantastic balance between the emotional and intellectual; technical and lyrical side of 21st Century composition."

Bernofsky has received grants from The National Foundation for the Advancement of the Arts, The American Music Center, and The American Composers Forum. Her Sonatine won the National Flute Association's Newly Published Music Competition, and her chamber opera, Mooch the Magnificent, won the Opera Puppets Award at Boston Metro Opera. Her compositions have been commissioned by The Del Mar Trio, The Bloomington Symphony, The Holyoke Civic Symphony, The South Shore Conservatory, Sinfonia Calcania of Boston, The Harford Ballet, Reimagining Opera for Kids, and many other ensembles and soloists.

Bernofsky's Concerto for Trumpet and Orchestra has been featured in the journal of the International Trumpet Guild and was the subject of a doctoral dissertation at the University of Wisconsin-Madison. Her string quartet Anacostia Journal was featured on the PBS program “NOW with Bill Moyers.”

Bernofsky strives to capture the unique expressive potential of each instrument, an approach that has made her work popular with performers looking for new works to showcase their abilities. Her philosophy of composition is simple: music should be a joy both to play and to hear.

Her music has been heard from Carnegie Hall to Grieg Hall (in Bergen, Norway), as well as at major conferences including those of The Midwest Clinic, the International Trombone Association, the International Women’s Brass Conference, and the American String Teachers Association. Lauren Bernofsky's music can be heard on the Polarfonia, Emeritus, Music to My Ears, Albany, Blue Griffin, and MSR Classics labels.