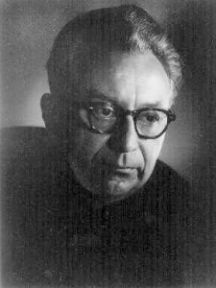 There have been few more universally admired twentieth-century American composers than Vincent Persichetti. His contributions have enriched the entire musical literature and his influence as performer and teacher is immeasurable.

Born in Philadelphia in 1915, Persichetti began his musical life at age five, first studying piano, then organ, double bass, tuba, theory and composition. By the age of 11, he was paying for his own musical education and helping to support himself by performing professionally as an accompanist, radio staff pianist, orchestra member and church organist. At 16, he was appointed organist and choir director for the Arch Street Presbyterian Church in Philadelphia, a post he held for nearly 20 years. A virtuoso pianist and organist, he combined extraordinary versatility with an osmotic musical mind, and his earliest published works, written when the composer was 14, exhibit mastery of form, medium and style.

Concurrent with these early activities, Persichetti was a student in the Philadelphia public schools and received a thorough musical education at the Combs College of Music, where he earned a Mus. B. degree in 1935 under Russel King Miller, his principal composition teacher. From the age of 20, he was simultaneously head of the theory and composition departments at the Combs College, a conducting major with Fritz Reiner at the Curtis Institute and piano major with Olga Samaroff at the Philadelphia Conservatory, in addition to studying composition with a number of important American composers. He received a Diploma in Conducting from the Curtis Institute and Mus. M. and Mus. D. degrees from the Philadelphia Conservatory.

In 1941 Persichetti was appointed head of the theory and composition departments at the Philadelphia Conservatory and in the same year married pianist Dorothea Flanagan. A daughter Lauren, was born in 1944 and a son, Garth, in 1946. In 1947 he joined the faculty of the Juilliard School of Music, assuming chairmanship of the Composition Department in 1963. Persichetti was appointed Editorial Director of the music publishing firm of Elkan-Vogel, Inc. in 1952.

Over the years, Vincent Persichetti was accorded many honors by the artistic and academic communities, including Honorary Doctor of Music degrees from Bucknell University, Millikin University, Arizona State University, Combs College, Baldwin-Wallace College, Peabody Conservatory, and honorary membership in numerous musical fraternities. He was the recipient of three Guggenheim Fellowships, two grants from the National Foundation on the Arts and Humanities and one from the National Institute of Arts and Letters, of which he was a member. He received the first Kennedy Center Friedheim Award, Brandeis University Creative Arts Award, Pennsylvania Governor’s Award, Columbia Records Chamber Music Award, Juilliard Publication Award, Blue Network Chamber Music Award, Symphony League Award, Philadelphia Art Alliance Medal for Distinguished Achievement, Medal of Honor from the Italian Government, and citations from the American Bandmasters Association and National Catholic Music Educators Association. Among some 100 commissions were those from the Philadelphia Orchestra, the New York Philharmonic, the St. Louis and Louisville Symphony Orchestras, the Koussevitsky Music Foundation, Naumberg Foundation, Collegiate Chorale, Martha Graham Company, Juilliard Musical Foundation, Hopkins Center, American Guild of Organists, Pittsburgh International Contemporary Music Festival, universities and individual performers. He appeared as guest conductor, lecturer and composer at over 200 universities. Wide coverage by the major TV and news media of the premiere of his A Lincoln Address helped to focus worldwide attention on his music.

Persichetti composed for nearly every musical medium. More than 120 of his works are published and many of these are available on commercial recordings. Though he never specifically composed ""educational"" music as such, many of his smaller pieces are suitable for teaching purposes. His piano music, a complete body of literature in itself, consists of six sonatinas, three volumes of poems, a concerto and a concertino for piano and orchestra, serenades, a four-hand concerto, a two-piano sonata, twelve solo piano sonatas, and various shorter works.

His keyboard virtuosity led him to produce nine organ works, including Sonatina for Organ, Pedals Alone, and the dramatic Shimah B’Koli (Psalm 130), as well as nine sonatas for harpsichord.

Persichetti’s style of orchestral writing reflected his considerable talent and experience as a conductor. Of his symphonies, several, notably the Fourth, Fifth (Symphony for Strings), and Eighth, have made their way into the repertoire of major American symphonic ensembles. The Seventh Symphony was a very personal statement and is a symphonic development of materials from his small choral book Hymns and Responses for the Church Year. Another large important orchestral work, commissioned for the Philadelphia Orchestra, is Sinfonia: Janiculum, written while Persichetti was in Rome on his second Guggenheim Fellowship. The most famous of his smaller orchestral works, and one firmly established in American symphonic literature, is The Hollow Men for trumpet and string orchestra, a delicate evocation of the T.S. Eliot poem. Three of his last commissions were the English Horn Concerto (New York Philharmonic), Flower Songs: Cantata No. 6 (Michael Korn and the Philadelphia Singers), and Chorale Prelude: Give Peace, O God (Ann Arbor chapter of the American Guild of Organists).

The numerous instrumental compositions include two unique series: one comprises 15 different works each entitled Serenade for such diverse combinations as piano duet, flute and harp, solo tuba, orchestra, band, two recorders, two clarinets and the trio of trombone, viola and cello. The series of 25 pieces, each entitled Parable, occupied Persichetti’s thoughts for some time. He also wrote four string quartets, a piano quintet, solo sonatas for violin and cello, Infanta Marina for viola and piano, Little Recorder Book, and Masques for violin and piano, to name just a few.

Though not of the same magnitude as Harmonium, Persichetti’s other vocal compositions exhibit a unique wedding of text and music which sets them apart from most other composers’ efforts in this genre. His choral output ranges from small works such as Proverb for mixed voices, Song of Peace for male chorus and piano, Spring Cantata for women’s voices and piano, through larger works: Mass for mixed chorus a cappella, Winter Cantata for women’s voices, flute and marimba, and Glad and Very for two-part mixed, women’s or men’s voices and piano, and then to large scale sacred and secular works: The Pleiades for chorus, trumpet and string orchestra, Celebrations for chorus and wind ensemble, and what Persichetti considered to be his magnum opus, The Creation, a huge work for solo vocal quartet, chorus and orchestra with texts drawn by the composer from mythological scientific, poetic and Biblical sources. The small but significant choral book Hymns and Responses for the Church Year, has already been influential in breathing a new spirit into twentieth-century hymnody.

More than any other major American composer, Persichetti poured his talents into the literature for wind band. From the Serenade for Ten Wind Instruments, Op. 1 to the Parable for Band, Op. 121, he provided performers and audiences with a body of music of unparalleled excellence. Of his 14 band works, four are of major proportions: Masquerade, Parable, A Lincoln Address and Symphony for Band. Of lesser compositional importance, the Divertimento is nevertheless one of the most widely performed works in the entire repertoire.

In additions to his exhaustive compositional efforts, Persichetti found time to write one of the definitive books on modern compositional techniques, Twentieth Century Harmony: Creative Aspects and Practice (W.W. Norton, 1961) and essays in two books by Robert Hines on twentieth century choral music and twentieth century orchestral music (University of Oklahoma Press, 1963 and 1970). He also co-authored a biography of William Schuman (G. Schirmer, 1954).

To a new, adventurous generation of composers 'fortunately, large and musically eloquent' he was a teacher par excellence and a highly lucid theorist. In both capacities his great artistry was ever clear and impressive, providing an example of dynamic leadership for those who encountered his genius.