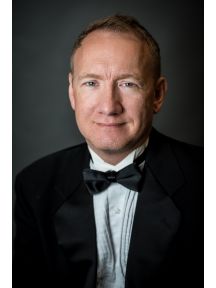 Todd Parrish (b. 1971) has taught public school orchestra at all levels for over 20 years in Illinois, Virginia and Florida. His ensembles have performed at many outstanding venues, including Atlanta Symphony Hall, the Kennedy Center, and Carnegie Hall. He currently teachers high school orchestra and music theory in Winter Park, Florida.

Mr. Parrish received a Bachelor of Music Education from ORU in Tulsa, Oklahoma where he studied violin, piano, and string pedagogy. He received a Master of Music in orchestral conducting from the University of Arizona in Tucson, where he studied conducting with Jindong Cai, string quartet with cellist Nancy Green, and violin with Bonnie Terry. He has also studied conducting at workshops with many leading teachers in Colorado, South Carolina, Maine, and Aix-en-Provence, France.

In August 2013, Mr. Parrish became the orchestra editor for J.W. Pepper sheet music and the string editor for Wingert-Jones Publications based in Exton, Pennsylvania. He arranges classical music for school orchestras and writes original compositions for all levels. In 2018, Mr. Parrish became the orchestra editor for Carl Fischer Music in New York City. He has lead new music reading session clinics at music conferences around the country along with workshops on how to prepare music for publication. He is published by Alfred Music, Wingert-Jones Publications, and Carl Fischer Music.