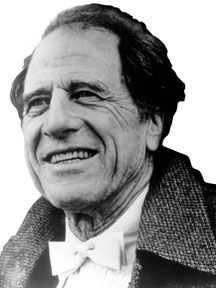 A true Renaissance man, Lukas Foss (born August 12, 1922, Berlin, Germany) was that rare breed of musician, equally renowned as a composer, conductor, pianist, educator and spokesman for his art. The many prestigious honors and awards he received testify to his importance as one of the most brilliant and respected figures in American music. As a composer, Mr. Foss eagerly embraced the musical languages of his time, producing a body of over one hundred works that Aaron Copland described as including "among the most original and stimulating compositions in American Music." As Music Director of the Buffalo Philharmonic Orchestra, Brooklyn Philharmonic and Milwaukee Symphony, Foss was an effective champion of living composers of every stripe and has brought new life to the standard repertoire. His legendary performances as a piano soloist, in repertory ranging from J. S. Bach's D Minor Concerto to Leonard Bernstein's Age of Anxiety, have earned him a place among the elite keyboard artists of our time.

As a conductor, Mr. Foss has been hailed for the adventurous mix of traditional and contemporary music that he programs, and he appeared with the world's greatest orchestras, including the Boston, Chicago, London and Leningrad Symphonies, the Philadelphia and Cleveland Orchestras, Santa Cecilia Orchestra of Rome, and the New York, Berlin, Los Angeles and Tokyo Philharmonics.

In 1937, as a fifteen-year old prodigy, Lukas Foss came to America to study at Philadelphia's Curtis Institute of Music. By that time, he had already been composing for eight years, starting under the guidance of his first piano teacher, Julius Herford, in Berlin, the city of his birth. He also studied in Paris with Lazare Levy, Noel Gallon, Felix Wolfes and Louis Moyse, after his family fled Nazi Germany in 1933. At Curtis, his teachers included Fritz Reiner (conducting) and Isabelle Vengerova (piano). By age 18, the young musician had graduated with honors from Curtis, and was headed for advanced study in conducting with Serge Koussevitsky at the Berkshire Music Center, Tanglewood and in composition with Paul Hindemith at Tanglewood and Yale University. From 1944 to 1950, Foss was the pianist in the Boston Symphony Orchestra and in 1945 he was the youngest composer ever to receive a Guggenheim fellowship.

When Foss succeeded Arnold Schoenberg as Professor of Composition at the University of California at Los Angeles in 1953, the University probably thought it was replacing a man who made traditions with one who conserved them. But that was not how things turned out. In 1957, seeking the spontaneous expression that lies at the root of all music, he founded the Improvisational Chamber Ensemble, a foursome that improvised music in concert, working not from a score, but from Foss' ideas and visions. The effects of these experiments soon showed in his composed works, where Foss began probing and questioning the ideas of tonality, notation and fixed form. Even time itself came up for scrutiny in his pioneering work, Time Cycle, which received the New York Music Critic's Circle Award in 1961, and was recorded on the CBS label. At its world premiere (for which the Improvisational Chamber Ensemble provided improvised interludes, between the movements), Leonard Bernstein and the New York Philharmonic performed the entire work twice in the same evening, in an unprecedented gesture of respect.

Lukas Foss' compositions of the last fifty years prove that a love for the music of the past can be reconciled with all sorts of innovations. Whether the musical language is serial, aleatoric, neoclassical or minimalist, the "real" Lukas Foss is always present. The essential feature of his music is the tension, so typical of the 20th Century, between tradition and new modes of musical expression. Many of his works - Time Cycle (1960) for soprano and orchestra, Baroque Variations (1960) for orchestra, 13 Ways of Looking at a Blackbird (1978) for soprano and small ensemble, Tashi (1986), for piano, clarinet and string quartet, and Renaissance Concerto (1985), for flute and orchestra - are landmarks of the 20th Century repertoire.

His ideas - and his compelling way of expressing them - garnered considerable respect for Foss as an educator as well. He taught at Tanglewood, and has been composer-in-residence at Harvard, the Manhattan School of Music, Carnegie Melon University, Yale University and Boston University. In 1983 he was elected to membership in the American Academy of Arts and Letters and in May, 2000 received the Academy's Gold Medal in honor of his distinguished career in music. The holder of eight honorary doctorates (including a 1991 Doctor of Music degree from Yale), he was in constant demand as a lecturer, and delivered the prestigious Mellon Lectures (1986) at Washington's National Gallery of Art.

Still an active musician into his 80s, Foss continued to teach, conduct and compose. Recent works include two new string quartets (No. 4 - 1999; No. 5 - 2000), a Piano Concerto for the Left Hand and Orchestra (1993), Toccata: Solo Transformed (2000) for Piano and Orchestra, Symphonic Fantasy for Orchestra (2002), Concertino: Baroque Meditations (2003) for Orchestra, For Aaron for Chamber Ensemble or Chamber Orchestra (2002) and a Concerto for Band (2002), written for a consortium of independent secondary schools and private colleges.

Lukas Foss, a long time resident, of New York City, died there at home on February 1, 2009. He is survived by his wife Cornelia, a noted painter, two children, a grown son and daughter, and three grandchildren.